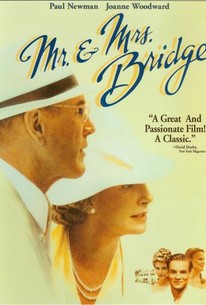 Mr. and Mrs. Bridge (played by real-life "Mr. and Mrs." Paul Newman and Joanne Woodward) are well-to-do residents of Kansas City in the 1940s. So far as the Bridges are concerned, however, it's the 1920s, with Mr. Bridge treating his wife like property, regarding his grown children as if they're still adolescents, and habitually voting against that upstart Roosevelt. Though the underlying painfulness of such an archaic arrangement is never ignored, Mr. Bridges' obstinacy is for the most part amusing. The scene that seemed to please the audience most was the one in which Mr. Bridge orders Mrs. Bridge not to leave their table at their country club despite tornado warnings (they sit quietly in the deserted dining room while the building shakes and shudders). As for Mrs. Bridge, her "life" is totally defined by those around her--which in any other film would be a tragedy, but which here seems a logical extension of all that's gone before. Based on two separate novels by Evan S. Connell, Mr. & Mrs. Bridge is a rare excursion into Americana by the Ismail Merchant-James Ivory team.

Hubert Saint-Macary
as Copyist in the Louvre

Melissa Newman
as Young India at the Pool

Roch Leibovici
as Watch Seller on the Quai