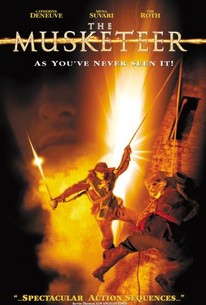 Director Peter Hyams brings the modern choreography talents of famed Hong Kong fight sequence designer Xin Xin Xiong to this action adventure that departs widely from its classic novel source material, focusing exclusively on the D'Artagnan character and either excising other characters completely or relegating them to minor supporting roles. Justin Chambers stars as D'Artagnan, a country-bred lad whose skill with a sword has led to aspirations of becoming a Musketeer, one of the French king's elite guard. Upon arriving in Paris, however, he finds that the Musketeers have been disbanded by order of Cardinal Richelieu (Stephen Rea), who is usurping the king's authority with the help of a lethally gifted henchman, Febre (Tim Roth). Soon, D'Artagnan is embroiled in an effort to prevent a war between his native country and England, meeting up with a beautiful love interest (Mena Suvari) along the way. As he has often done before, director Hyams doubles as his own cinematographer.

Sve Walser
as Man 1 at bar

Sven Walser
as Man No. 1 at Bar

Jean-François Wolff
as Cardinal's Guard No. 1

Stefan Weinert
as Mercenary No. 2

Sve Nichulski
as Guard at door

Sascha Schiffbauer
as Jail Guard No. 1

Sven Nichulski
as Guard at Door

Frank Ferner
as Jail Guard No. 3

Roland Stemmer
as Musketeer No. 1

Jo Stock
as Another musketeer

Dean Gregory
as Musketeer No. 2

Ciaran Mulhern
as Musketeer No. 3

Critic Reviews for The Musketeer

Audience Reviews for The Musketeer