My Life Without Me 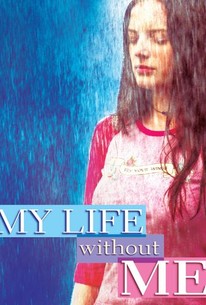 My Life Without Me

Sarah Polley keeps this production afloat with her moving performance.

My Life Without Me Ratings & Reviews Explanation

My Life Without Me Photos

Ann is 23-years-old, she has 2 young daughters, a husband who spends more time unemployed than working, a mother who hates the world, a father who has spent the last ten years in jail, and a job as a night janitor in a university that she could never attend in the daytime. They all live in a trailer, on the yard of her mother's house, in the outskirts of Vancouver. However, this gray existence changes completely when, after a medical check-up, a doctor tells Ann that she has very little time left on this earth. Learning that she has hardly two months to live, Ann decides to keep her condition a secret, and refuses to tell anybody--not even her husband--about her time remaining. She does not want people around her with long faces, and obsessed with her approaching death. Ann starts to make a list of things to do before dying, which she completes little by little. The list targets a wide range of things to which she must attend, including carrying out tasks like: saying exactly what she thinks to certain people; as well as getting herself some fake fingernails. Unexpectedly, Ann discovers an appetite for life that drives her to live her last days with a sensual and furious intensity she had not known before. During this short time, she prepares her daughters for a life without her; she meets a solitary wounded man, whom she seduces; and most importantly, Ann faces what remains of her life with a certain steadfast courage she never knew she possessed.

Tyron Leitso
as Guy in Bar

Critic Reviews for My Life Without Me

Audience Reviews for My Life Without Me

My Life Without Me Quotes