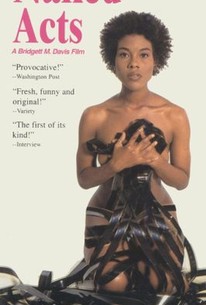 A beautiful African American girl's dream of becoming a famous actress hinges on her willingness to disrobe for the camera. For some this would be a simple decision, but for Cicely it is crucial. This off-beat, razor-sharp comedy (marking the feature film debut of screenwriter/director Bridgett M. Davis) sharply focuses on the things that have made the issue such a cross-roads for the budding actress. She is the daughter of the notorious Lydia Love, one of the 1970's hottest blaxploitation stars. When Cicely was young, one of Lydia's boyfriends molested her. The girl then spent her adolescence overweight and feeling ugly. Eventually she lost 57 pounds, but even though her boy friend and director Joel assures her that she's gorgeous, Cicely just can't believe it. She is so self-conscious and worried, that she refuses to take off her clothes when she and Joel go to bed. She gets her first acting break when arty filmmaker Marcel Brown casts her in his latest avant-garde masterpiece. It's a fine experience but for the nude scene. The comedy comes in as different people attempt to persuade her to relax and show-off her beautiful body. In so doing filmmaker Davis takes every opportunity to take some well-aimed pokes at everything from acting to modern philosophical reasoning.

Peekoo A. Lewis
as Bathouse Attendant

There are no featured audience reviews for Naked Acts at this time.