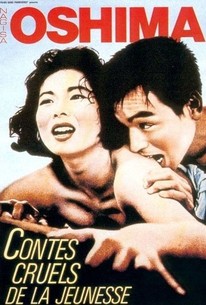 Nagisa Oshima's groundbreaking film opens with young, attractive Mako and her friend hitching a ride from an old man. After her friend leaves, the man tries to rape her, and she is saved only by the handsome Kiyoshi. Later, against the background of the tumultuous 1960 U.S./Japan Security Treaty demonstrations, Kiyoshi and Mako walk along a grungy seaside lumberyard while talking about sex. He attempts to kiss her, she slaps him, and he throws her in the water. She cries out that she can't swim. When she continues to refuse his advances, he steps on her fingers as she clings to a log. Kiyoshi then saves Mako from a trio of seedy pimps looking to impress her into working for them, but after rescuing her, he forces himself on her again. With this unlikely beginning, Kiyoshi and Mako form a passionate though doomed romance. Soon she stops going to school and moves into his flea-ridden dive of an apartment. Utterly disillusioned with all trappings of societal convention, the two get cash by blackmailing businessmen and by shaking down Kiyoshi's middle-aged sugarmama. Tension with this Bonnie and Clyde duo builds after Mako has an abortion in a run down clinic, performed by an alcoholic doctor. ~ Jonathan Crow, Rovi