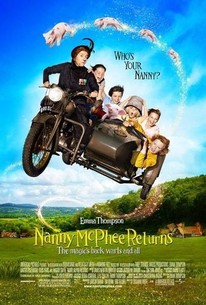 A struggling mother receives some much-needed assistance tending to the family farm and raising a group of spirited children while her military husband is fighting overseas in this sequel to the whimsical 2005 fantasy comedy Nanny McPhee. Mrs. Isabel Green (Maggie Gyllenhaal) lives in a scenic valley with her two sons and one daughter. They each understand the importance of working together as a family, and things are going remarkably smoothly for the rural quartet until a pair of spoiled cousins arrives for an extended stay, effectively turning the quaint little farm into a virtual zoo. As the situation quickly gets out of hand, Nanny McPhee (Emma Thompson) suddenly appears on Isabel's doorstep claiming that she can bring a much-needed sense of order to the out-of-control household. In time the mysterious helper does just that, using powerful magic to teach her young charges the importance of getting along, and gradually winning their trust in the process. But when the piglets escape from their sty, the contentious kids must work together to recover the family farm's most valued assets, or risk losing everything their father worked so hard to build before he went off to fight in the war. Rhys Ifans and Maggie Smith co-star. ~ Jason Buchanan, Rovi