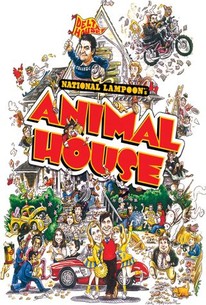 Director John Landis put himself on the map with this low-budget, fabulously successful comedy, which made a then-astounding 62 million dollars and started a slew of careers for its cast in the process. National Lampoon's Animal House is set in 1962 on the campus of Faber College in Faber, PA. The first glimpse we get of the campus is the statue of its founder Emil Faber, on the base of which is inscribed the motto, "Knowledge Is Good." Incoming freshmen Larry "Pinto" Kroger (Tom Hulce) and Kent "Flounder" Dorfman (Stephen Furst) find themselves rejected by the pretentious Omega fraternity, and instead pledge to Delta House. The Deltas are a motley fraternity of rejects and maladjusted undergraduates (some approaching their late twenties) whose main goal -- seemingly accomplished in part by their mere presence on campus -- is disrupting the staid, peaceful, rigidly orthodox, and totally hypocritical social order of the school, as represented by the Omegas and the college's dean, Vernon Wormer (John Vernon). Dean Wormer decides that this is the year he's going to get the Deltas expelled and their chapter decertified; he places the fraternity on "double secret probation" and, with help from Omega president Greg Marmalard (James Daughton) and hard-nosed member Doug Neidermeyer (Mark Metcalf), starts looking for any pretext on which to bring the members of the Delta fraternity up on charges. The Deltas, oblivious to the danger they're in, are having a great time, steeped in irreverence, mild debauchery, and occasional drunkenness, led by seniors Otter (Tim Matheson), Hoover (James Widdoes), D-Day (Bruce McGill), Boon (Peter Riegert), and pledge master John "Bluto" Blutarsky (John Belushi). They're given enough rope to hang themselves, but even then manage to get into comical misadventures on a road trip (where they arrange an assignation with a group of young ladies from Emily Dickinson University). Finally, they are thrown out of school, and, as a result, stripped of their student deferments (and, thus, eligible for the draft). They decide to commit one last, utterly senseless (and screamingly funny) slapstick act of rebellion, making a shambles of the university's annual homecoming parade, and, in the process, getting revenge on the dean, the Omegas, and everyone else who has ever gone against them. ~ Bruce Eder, Rovi

Robert Cray
as (uncredited) Bandmember, Otis Day and the Knights

John Freeman
as Man on Street

Rick Greenough
as Mongol
View All