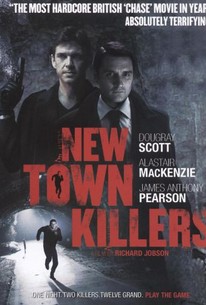 A poorly-made Scottish thriller that suffers from bad cinematography, let-down performances and a distinct lack of thrills.

With a premise that suggests an early 21st century variation on David Fincher's paranoia classic The Game (1997), New Town Killers stars Dougray Scott as Alistair, a slimy, ice water-veined financier who gets his kicks and thrills by targeting human prey. His modus operandi involves bringing in an innocent young candidate for a new job, Jamie Stewart (Alastair Mackenzie), and demanding as a prerequisite that the two play a mysterious game together. They must find a down-and-outer and challenge him to escape from their clutches over the course of one long and fateful night. The "prey" on this occasion is Sean McDonald (James Anthony Pearson), an inner-city teen with a serious problem on his hands: his pregnant sister risks being killed by the thugs to whom she owes gambling money. Alistair informs the young man that if he manages to evade them in their chase, he will receive enough money to clear off the towering gambling debts of his pregnant sister; if he loses, he will be killed. Out of concern for his sister, Sean agrees to the contest, though victory seems impossible for two major reasons: first, the crafty Alistair has closed all major exit routes from the city without informing Sean of this, and second, Alistair secretly plants a tracking device on Sean that the young man isn't aware of.