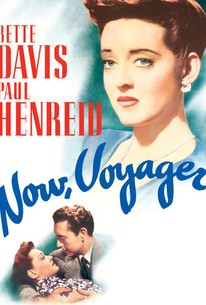 Now, Voyager is a Hollywood swooner with Bette Davis and Paul Henreid in a melodrama to end all melomers.

Olive Higgins Prouty's popular novel was transformed into nearly two hours of high-grade soap opera by several masters of the trade: Warner Bros., Bette Davis, Paul Henreid, director Irving Rapper, and screenwriter Casey Robinson. Davis plays repressed Charlotte Vale, dying on the vine thanks to her domineering mother (Gladys Cooper). All-knowing psychiatrist Dr. Jaquith (Claude Rains) urges Charlotte to make several radical changes in her life, quoting Walt Whitman: "Now voyager sail thou forth to seek and find." Slowly, Charlotte emerges from her cocoon of tight hairdos and severe clothing to blossom into a gorgeous fashion plate. While on a long ocean voyage, she falls in love with Jerry Durrance (Henreid), who is trapped in a loveless marriage. After kicking over the last of her traces at home, Charlotte selflessly becomes a surrogate mother to Jerry's emotionally disturbed daughter (a curiously uncredited Janis Wilson), who is on the verge of becoming the hysterical wallflower that Charlotte once was. An interim romance with another man (John Loder) fails to drive Jerry from Charlotte's mind. The film ends ambiguously; Jerry is still married, without much chance of being divorced from his troublesome wife, but the newly self-confident Charlotte is willing to wait forever if need be. "Don't ask for the moon," murmurs Charlotte as Max Steiner's romantic music reaches a crescendo, "we have the stars." In addition to this famous line, Now, Voyager also features the legendary "two cigarettes" bit, in which Jerry places two symbolic cigarettes between his lips, lights them both, and hands one to Charlotte. The routine would be endlessly lampooned in subsequent films, once by Henreid himself in the satirical sword-and-sandal epic Siren of Baghdad (1953).

Sherlock Season 4, Master of None Season 2, Enemy of the State, and More on Netflix This Week
View All