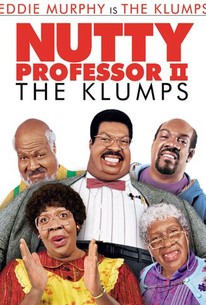 While Eddie Murphy is still hilarious as the entire Klump family, the movie falls apart because of uneven pacing, a poor script, and skits that rely on being gross rather than funny.

Overweight scientific genius Sherman Klump and his extended family are back in this sequel to the 1996 comedy smash The Nutty Professor. Sherman (played once again by Eddie Murphy) has come up with a discovery that ought to make him a multimillionaire: a youth serum that turns back the user's body clock. Sherman has also found time for a social life and has fallen in love with Denise Gains (Janet Jackson), a brilliant woman involved in DNA research. Sherman and Denise are engaged, but Sherman is still troubled by Buddy Love, the dark side of his personality that he wants to purge from his psyche forever. He persuades Denise to help him by splicing Buddy out of his DNA structure, but the experiment doesn't go as planned: instead of destroying Buddy, Sherman and Denise free him, and Buddy's first order of business is to get his hands on Sherman's youth serum, which Sherman has hidden at his family's house. In addition to Klump and Love, Murphy also plays Mama, Papa, Grandma, and nephew Ernie Klump, thanks to the makeup magic of Rick Baker.

David Sheffield
as Man in Bathroom

Tom Jourden
as Guy in Elevator

Kevin Michael Mondane
as Buddy at 15

Miguel A. Núñez Jr.
as Scientist

The Rock as Captain Marvel?
Box Office Guru Preview: Comedy vs. Cannibals at the Multiplexes
The Weekly Ketchup: Beyonce Gets Dissed And Defended, Sam Raimi Gives Some Hints On The Next Two "Spider-Man" Movies, And More!
View All