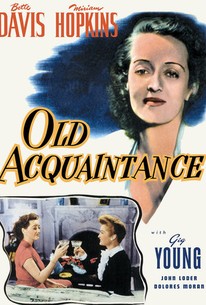 After the box office success of The Old Maid, Bette Davis and Miriam Hopkins were reunited for this catty drama. Kitty Marlowe (Davis) is a well-respected author who returns to the small town of her birth, where she becomes reacquainted with her childhood friend Millie Drake (Hopkins). While Millie is happy as a wife and mother and loves her husband Preston (John Loder), she's envious of Kitty's success, and Kitty's visit prompts Millie to sit down at the typewriter herself. Millie turns out a sexy potboiler that, with Kitty's help, attracts the attention of a publisher. To the surprise of them both, Millie's book is a runaway bestseller, and a decade later she's one of the most successful authors in America, easily eclipsing Kitty's more highbrow work. Preston finds himself growing disenchanted with Millie once success begins to go to her head, and he finds himself attracted to Kitty; while Kitty tries to dissuade Preston's advances, a scorned Millie believes that her old friend has been trying to steal her husband away from her. Old Acquaintance was remade in 1981 as Rich and Famous.

Francine Rufo
as Deirdre as a Child

Gordon B. Clark
as Usher