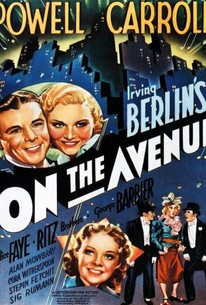 On The Avenue Ratings & Reviews Explanation

On The Avenue Photos

Director Roy Del Ruth and singing star Dick Powell were raided from the Warner Bros. stables for this frothy musical comedy that features a wonderful collection of Irving Berlin songs, including "I've Got My Love to Keep Me Warm" and "Slumming on Park Avenue." Powell stars as Broadway impresario Gary Blake, who is busy putting together his latest Broadway musical starring the Ritz Brothers (as themselves) and musical comedy star Mona Merrick (Alice Faye). Mona's role as "The Richest Girl in the World" is a blunt burlesque of Park Avenue socialite Mimi Caraway (Madeleine Carroll), who catches a performance and becomes enraged at the not-so-subtle ribbing. Mimi goes backstage to protest Mona's performance to Gary, who is immediately attracted to Mimi and agrees to tone down the role. Unfortunately, Mona, who was once Gary's girlfriend, has other ideas. When Mimi and her family come to the next performance, they are shocked to discover Mona's character is even more nasty and self-centered than before. In retaliation, Mimi and her family buy out the production and Mimi makes changes that even the moony Gary objects to.

The Ritz Brothers [Al Jimmy Harry]
as Themselves

Hank Mann
as Footman in sketch

Al Ritz
as Himself

Harry Ritz
as Himself

Jimmy Ritz
as Himself
View All

Critic Reviews for On The Avenue

Audience Reviews for On The Avenue

On The Avenue Quotes