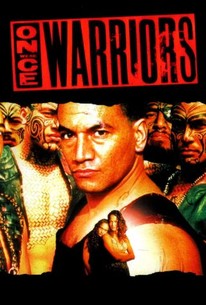 Once Were Warriors isn't an easy watch, but the raw power of its story -- and the performances of an excellent cast -- reward viewers who rise to the challenge.

Once Were Warriors Ratings & Reviews Explanation

Once Were Warriors Photos

This powerful drama was a major hit in its native New Zealand, outgrossing Jurassic Park in Kiwi cinemas. Jake and Beth Heke (Temurea Morrison and Rena Owen) are a couple of Maori descent who are living in a slum in Aukland. While it's obvious that they still love each other, Jake's alcoholism has driven a wedge into their relationship and has left their children emotionally scarred. Jake is charming while sober, but when drunk, he's a violent psychopath given to blink-of-an-eye mood changes and terrible cruelty against his loved ones. Liquor has also made it difficult for Jake to hold onto a job, leaving him dependent on the dole to feed his family. Nig (Julian Arahanga), Jake's oldest son, has turned his back on his father and joined a gang of Maori youths whose initiation rituals include tattooing and torture. Jake's 13-year-old daughter Grace (Mamaengaroa Kerr-Bell) prefers to spend her time with her drug-addicted boyfriend -- rather than stay home and fight off the advances of her father's friends. And Boogie (Taungaroa Emile) ends up in juvenile hall when Jake's drinking prevents him from going to court to speak on Boogie's behalf. Once Were Warriors was based on an acclaimed novel by Alan Duff.

Richard Mehana
as Taunter in Court

Richard Meihana
as Taunter in Court

News & Interviews for Once Were Warriors

Critic Reviews for Once Were Warriors

Audience Reviews for Once Were Warriors

Once Were Warriors Quotes