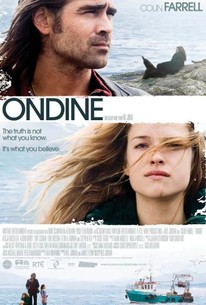 A man makes a startling discovery that may or may not be magical in this drama from writer and director Neil Jordan. Syracuse (Colin Farrell) is a fisherman who lives in a small town on the Southern coast of Ireland. Syracuse is an alcoholic, and though he's been sober for two years, most of his neighbors still remember him as a embarrassing drunk, while his ex-wife now lives with another man. Syracuse tries to scratch out a living from the ocean and help support his young daughter, Annie (Alison Barry), who suffers from a serious kidney ailment, but good luck is rarely with him until one day, when he pulls up his nets and finds what appears to be a woman caught in them. To Syracuse's surprise, the woman is alive, and he brings her to shore. The woman is a mysterious and secretive type who doesn't want to tell Syracuse anything about herself or be seen by anyone; Annie proposes that she's a selkie, a mythic creature of the sea that can take human form when it falls in love with the right person. Syracuse almost believes that Annie is right, especially after good luck and good fishing begins coming his way after discovering her, but unfortunately the woman Syracuse has named Ondine (Alicja Bachleda) has certain concerns more pressing than the good fortune of her benefactor. Ondine was an official selection at the 2009 Toronto International Film Festival. ~ Mark Deming, Rovi

Penny Dreadful, The Walking Dead, The Witch, and More Available on Netflix and Amazon Prime
Critics Consensus: Get Him to the Greek Is Certified Fresh
View All