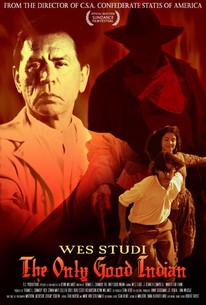 The Only Good Indian

Filmmaker Kevin Willmott offers a bitter, revisionist look at the conventions of the traditional western in this powerful drama. Nachwihiata (Winter Fox Frank) is a teenaged Native American boy growing up on a farm in Kansas in the early 1900's. Nachwihiata's peaceful life is shattered when a handful of renegades capture the boy and take him against his will to a juvenile home for Indian children, designed to indoctrinate them into the ways of white Christian America while putting them to hard labor. Nachwihiata is given a new name, Charlie, but he doesn't care for it or the brutal treatment handed out at the school, and he runs away. A bounty is soon posted for Charlie's return, and Sam Franklin (Wes Studi) sets out to find him. Sam is a Native American who has turned his back on his heritage and become an Indian tracker who aspires to be "whiter than the white man." However, Sam isn't the only one looking for Charlie; McCoy (J. Kenneth Campbell) is a sheriff with a bitter hatred of Indians who wants the bounty for himself, and has no qualms about killing Sam to keep him out of the way. The Only Good Indian received its world premiere at the 2009 Sundance Film Festival.

David Midthunder
as Nawkaw
View All

Critic Reviews for The Only Good Indian

Audience Reviews for The Only Good Indian

There are no featured audience reviews for The Only Good Indian at this time.

The Only Good Indian Quotes