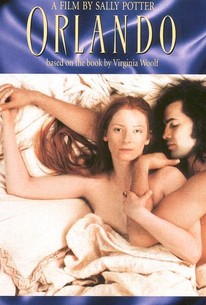 Orlando can't match its visual delights with equally hefty narrative -- but it's so much fun to watch that it doesn't need to.

Independent filmmaker Sally Potter's gender-bending epic, which views four centuries of sexual politics through the eyes of a sex-switching main character, is based on the 1928 novel by Virginia Woolf. The androgynous title character is played with delicate quietude by Tilda Swinton. The story begins during the reign of the aging Queen Elizabeth I (Quentin Crisp, in a droll turn recalling his The Naked Civil Servant). Queen Elizabeth takes a shine to the attractive young Orlando and seeks out his sexual favors. In return, Elizabeth grants him a large estate, commanding him, "Do not fade, do not wither, do not grow old." Orlando takes the queen at her word and doesn't. When Elizabeth dies, Orlando becomes attracted to Sasha (Charlotte Valandrey), the daughter of a Russian diplomat, but she rebuffs his advances. Crushed, Orlando accepts an ambassadorship to Constantinople. After witnessing the killing of a man in battle, Orlando undergoes a change of sex, becoming a woman and returning to England, where she hobnobs with 18th-century geniuses like Jonathan Swift, Alexander Pope, and John Addison. Walking through a garden labyrinth, the time frame shifts to the 19th century, and Orlando falls in love with a handsome American (Billy Zane). Now in the 20th century, Orlando gives birth to his child and continues on.

Lothaire Bluteau
as The Kahn

Quentin Crisp
as Queen Elizabeth I

Thom Hoffman
as William of Orange

Dudley Sutton
as King James I