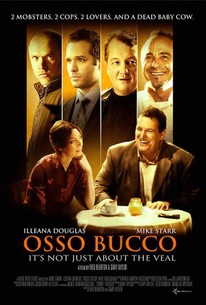 An amiable gangster who has been targeted for death sets out for one last plate of veal ossobucco, never realizing that it may be the last meal he ever eats. The colds winds are blowing into Chicago, and no one in town has realized that this will be the biggest snowstorm in the history of the Windy City. Jelly Dinotto is a misfit Mafioso who's earned a reputation as a large and lovable thug. Having just received marching orders to go back to Italy, Jelly takes his cousin Nick to nearby Vesuvios Restaurant in order to enjoy one last plate of veal ossobucco before he departs -- never once suspecting that his departure will be more permanent than he ever suspected, and that Nick himself has been charged with orchestrating the dirty deed. As the two cousins sit down for dinner and the snow begins to fall outside, it quickly becomes apparent that the gangsters will be trapped in the restaurant with a pair of underachieving Chicago detectives and the few employees who have stuck around to close up shop. With the snow piling up fast and the prospects for leaving town long gone, Jelly and earthy waitress Megan (Illeana Douglas) strike up a friendly conversation. Unbeknownst to Megan is the fact that Jelly has been carrying a torch for the pretty waitress for quite some time now. But will the meal that Megan has just delivered to Jelly's table be his last, or is there a chance that love will somehow find the power to overcome death as this desperate group sits snowbound in a Chicago restaurant?

Michelle Roberts-Bradley
as News Anchor No. 1

Gary Taylor
as News Anchor No. 2

There are no critic reviews yet for Osso Bucco. Keep checking Rotten Tomatoes for updates!

There are no featured audience reviews for Osso Bucco at this time.