Othello (The Tragedy of Othello: The Moor of Venice) 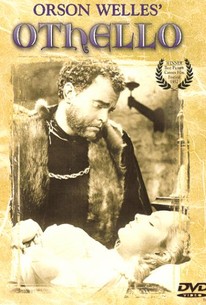 Othello (The Tragedy of Othello: The Moor of Venice)

This ragged take on Othello may take liberties with the source material, but Orson Welles' genius never fails to impress.

Othello (The Tragedy of Othello: The Moor of Venice) Ratings & Reviews Explanation

Othello (The Tragedy of Othello: The Moor of Venice) Photos

Anyone interested in making a low-budget movie ought to see Orson Welles' screen adaptation of William Shakespeare's Othello, a striking example of how much can be achieved with very little money. For years, stories about this singularly troubled movie circulated more widely than the film itself; Welles began shooting Othello without securing full financing, so he would gather his cast, assemble a crew, and shoot until his money ran out. He would then take an acting assignment to raise some cash, reassemble his cast, and start filming again until the latest batch of money was gone. For the sequence featuring the murder of Cassio, Welles (depending on who tells the story) either couldn't pay the bill for the costumes or they just didn't arrive in time, so he reset the scene in a Turkish bath with his players wrapped in towels borrowed from their hotel. This process went on for four years; by the time Welles was done, the film was on its third Desdemona, and the director, himself, had to dub several voices, since most of the dialogue was recorded after the fact. Remarkably, the finished film not only isn't a disaster, it's a triumph, that rare example of a movie based on a Shakespeare play that's as exciting to look at as it is to listen to. While Welles pared the Bard's story of jealousy, betrayal, and murder to the bone (this version clocks in at a mere 92 minutes), the film's striking compositions and energetic quick-cutting allow the camera to tell more of the story than almost any other Shakespeare adaptation. Repeat viewers will see that Welles picked many of his camera angles to obscure the fact that Othello's mighty army was merely a handful of extras, but the unexpected bonus is a lean, muscular look that's the perfect match for the film's brisk narrative style. The spare, but powerful, visuals feel like a product of Expressionism, not a low budget, and the images have atmosphere to spare. In addition, it's truly a pleasure to hear Welles' rich baritone wrap itself around Shakespeare's dialogue; his con brio performance as the noble Moor undone by jealousy and betrayal has the impact of a fine stage rendition without overplaying its hand. Michael MacLiammoir is his equal as the conniving (and lustful) Iago, and had this film been more widely seen, it could well have sparked the successful screen career he so obviously deserved. And Michael Laurence is fine in an often witty turn as Cassio (with a verbal assistance from Welles). Only Suzanne Cloutier as the virtuous but wronged Desdemona lacks the forceful presence of the rest of the cast (though given how much of the role was edited away, it may not be entirely her fault). Welles' daughter spearheaded a campaign to restore and re-release Othello in 1992; and while the digital sheen of the re-recorded score sometimes makes for an odd contrast to the occasionally scratchy recordings of the dialogue, the new edition of the film looks better than ever (both on the big screen and on video) and is highly recommended to anyone who loves good acting or good cinema. ~ Mark Deming, Rovi

News & Interviews for Othello (The Tragedy of Othello: The Moor of Venice)

Critic Reviews for Othello (The Tragedy of Othello: The Moor of Venice)

Audience Reviews for Othello (The Tragedy of Othello: The Moor of Venice)

Othello (The Tragedy of Othello: The Moor of Venice) Quotes