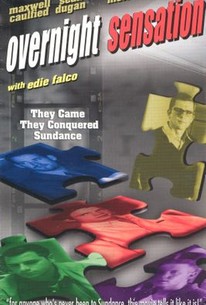 Independent filmmaker Glen Trotiner wrote and directed this look at the struggles of an independent filmmaker (at least he knows the subject) in this satiric comedy. Matthew Wells (Sean Dugan) is an aspiring filmmaker who has had about as much as he can take of his job as a production assistant for a major Hollywood producer. Like nearly every other struggling filmmaker in America who is trying to get a project off the ground, Matthew heads to Park City, UT, for the Sundance Film Festival, where he runs into an old college buddy, Rick Foster (Seth William Meier). Rick thinks Matthew's script has potential, and offers to help him shop the project in exchange for being brought aboard as producer if he can make a sale. Matthew agrees, and as Rick and veteran agent Abe Pollard (Mark Goddard) set out to sell Matthew's script, Matthew gets an idea -- he cuts up a copy of his screenplay into large jigsaw puzzle pieces, and sends them around to producers with a note saying that whoever can put the puzzle together gets first shot at financing his project. The stunt works, as Matthew's fragmented screenplay is suddenly the talk of the Festival, but Matthew soon has to ask himself if he's ready for what happens next as a handful of sleazy industry types beat a path to his door. Overnight Sensation features a cameo appearance by Edie Falco as one of the Sundance Festival staff.

There are no critic reviews yet for Overnight Sensation. Keep checking Rotten Tomatoes for updates!

There are no featured audience reviews for Overnight Sensation at this time.