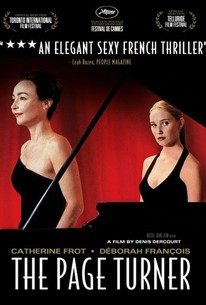 Reminiscent of Hitchcock and Chabrol, The Page Turner is elegant yet suspenseful, a revenge potboiler of a high degree.

Years after her once-promising career as a professional pianist is tragically sidelined, a young musician still haunted by the past receives a second chance at making things right in director Denis Dercourt's elegant tale of shattered dreams and delicate mutual dependence. Upon performing for the examination board in order to gain entrance into the prestigious musical Conservatory, young pianist Mélanie (Julie Richalet) finds her concentration shattered when the chairwoman of the jury - herself a famous concert pianist - carelessly signs an autograph for a fan. Her endless hours of rigorous training suddenly rendered useless by the pass of a pen, Mélanie remains unable to regain her composure after the incident and subsequently gives up music altogether after failing to pass the test. Years later, Mélanie is a file clerk at a well-renowned law firm whose skills soon catch the eye of senior partner M. Fouchécourt (Pascal Greggory). Impressed by her solid work ethic and unwavering dependability, Fouchécourt hires Mélanie as a live-in nanny whose duty it will be to watch over his son during an extended business trip. Upon arriving at Fouchécourt's lavish countryside mansion, Mélanie makes the acquaintance of Mme. Fouchécourt (Catherine Frot) - the very same pianist whose thoughtless action sent Mélanie's life into an irreversible downward spiral. It seems that now the tables have turned, and Mme. Fouchécourt herself has lost the confidence to perform. Her frazzled nerves somehow calmed by the presence of the quiet new helper, Mme. Fouchécourt implores Mélanie to sit in on her recitals and become her personal page turner as she attempts to overcome her debilitating fear of failure. ~ Jason Buchanan, Rovi

Critical Consensus: "TMNT" Gets Shredded; "Mimzy" Is Mixed; "Shooter" Misses; "Reign" Shines; "Pride" Sinks; Guess "Hills" Tomatometer!
Toronto Wrapup: Senh, Jen And Tim’s Raves And Rants From The Festival
CANNES: So, When Can I See These Movies?
View All