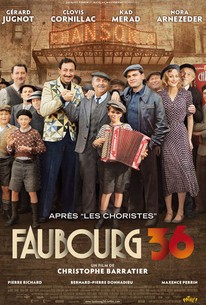 Sweet and light, this homage to French vaudeville -- and Francophilia in general -- is pretty, but its air of nostalgia occasionally borders on the saccharine.

A star is born in a time of both celebration and instability in this historical drama with music from director Christophe Barratier. In the spring of 1936, Paris is in a state of uncertainty; while the rise of the Third Reich in Germany worries many, a leftist union-oriented candidate, Léon Blum, has been voted into power, and organized labor is feeling its new power by standing up to management. While such matters might normally seem unimportant to Germain Pigoil (Gérard Jugnot), who runs a small vaudeville house in the Faubourg district, the chaos of the city seems to be impacting his life and his work -- his wife, Viviane (Elisabeth Vitali), has run off with her lover, she demands custody of their son, Jojo (Maxence Perrin), and unscrupulous local entrepreneur Galapiat (Bernard-Pierre Donnadieu) threatens to put Germain's theater out of business. With the help of a local political organizer, Milou (Clovis Cornillac), and veteran entertainer Jacky Jacquet (Kad Merad), Germain strikes a deal with Galapiat to reopen the theater, but business is slow until a lovely young woman with a remarkable voice, Douce (Nora Arnezeder), comes looking for a spot in Germain's show. Faubourg 36 (aka Paris 36) received its North American premiere at the 2008 Montreal World Film Festival.

Wilfred Benaiche
as Jeannot
View All

RT on DVD: A Sweet I Love You, Man Deleted Scene, Zooey Deschanel’s Latest, and More
Critics Consensus: Fast & Furious Is Running On Empty
View All