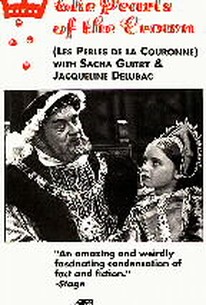 Pearls of the Crown

Originally titled Les Perles de Couronne, this Sacha Guitry historical extravaganza stars both Guitry and his wife Jacqueline Delubac. The plotline hinges on four valuable pearls, which pass from hand to hand over a period of several centuries, from the time of Britain's Henry VIII to the present. All of this is offered in flashback form, as a group of modern-day treasure hunters try to locate three of the missing pearls by tracing them back to their previous owners. Guitry shows up as King Francis I, Barras and Napoleon III, in addition to his contemporary persona of Jean Martin; Debulac is seen as Mary Queen of Scots and Empress Josephine. There isn't a scintilla of historical accuracy in the film, nor did Guitry have the slightest intention of including any; his sole purpose was to entertain the audience and serve up a superbly ironic denoument. The supporting cast is a polyglot of French, English and Italian actors, each speaking in his or her own language. The screenplay for Pearls of the Crown was cowritten by Guitry and another immensely talented filmmaker, Christian-Jaque. ~ Hal Erickson, Rovi

Lyn Harding
as An Equerry to His Majesty

Arletty
as Queen of Ethiopia

Émile Drain
as Napoleon I

Fred Duprez
as An American

Critic Reviews for Pearls of the Crown

Audience Reviews for Pearls of the Crown

Pearls of the Crown Quotes