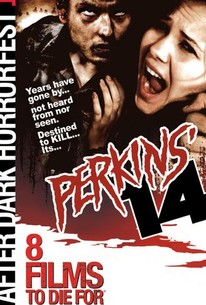 Dark Ride director Craig Singer returns to the helm with this shocking horror film about a delusional psychopath who creates a unified team of 14 maniacal killers. Produced entirely over the Internet, where writers uploaded story details and actors submitted audition tapes, Perkins' 14 was released into theaters as part of the third After Dark Horror Fest. Ronald Perkins was just six years old when his parents were brutally slaughtered right before his eyes. Unable to overcome the incredible trauma of witnessing such a diabolical event, Perkins becomes convinced that the killers who murdered his parents will eventually return to finish the job they started years ago -- and he plans to be fully prepared to fight back when they do. Years later, when Perkins turns 34, he kidnaps 14 people from his hometown of Stone Cove and sets about reprogramming them to become relentless killing machines. Now, if the killers ever do return, they'll have to get through Perkins' 14 in order to reach their intended target. Trouble is, now that Perkins' 14 are ready for battle, they've become increasingly difficult to contain.

Josh Davidson
as The Stranger
View All

There are no critic reviews yet for Perkins' 14. Keep checking Rotten Tomatoes for updates!