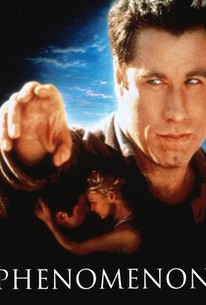 A small-town auto mechanic of average intelligence suffers a mysterious mishap and suddenly becomes the world's smartest man in this touching, some say, Capra-esque drama. George Malley is the mechanic. He is well liked in his community but no one would ever mistake him for a genius. For a long time he has secretly loved Lace, an attractive single mother who pays him little heed. George's extraordinary change happens when he steps outside during his 37 birthday party and gets zapped by a brilliant flash of heavenly light that may or may not have been caused by a UFO. He returns to the festivities a brilliant, curious fellow who is able to use nearly all of his brain's potential rather than the measly 10% most of us use. Not only can he learn and retain knowledge at an unbelievable rate, he also has psycho-kinetic powers to move things with his will. He can even predict earthquakes. Much of the movie centers on the ways in which people react to the new and improved George. Most people are unable to deal with his intelligence and avoid him. The FBI comes to suspiciously investigate him. Fortunately, George's best friend Nate remains loyal as does the town doctor. Lace also comes round and begins falling in love with him. But then the doctor discovers something about George's condition and the story takes a tragic turn.

Bruce A. Young
as Jack Hatch

Tony A. Mattos
as Ella's Father

Jewel Benedict
as May

Carl Parker
as Man in Orchard

Richard Gross
as Customer at Malley's

Isaac Reiswig
as Man in Crowd

Claudia Crespin
as Woman in Crowd

Michael Forner
as Man at Bar No. 1

Joseph A. Nicosia
as Man at Bar No. 2

Dan Partain
as Man at Bar No. 3

Betsy Berryhill
as Woman at Bar

Jack Chouchanian
as Technician No. 1

Eric G. Tignini
as Agent No. 2

Will Prater
as Helicopter Pilot
View All