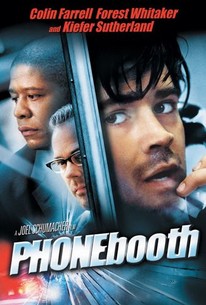 One man's life is thrown into turmoil by picking up a telephone in this claustrophobic thriller. Stu Shepard (Colin Farrell) is a brash, cynical, and self-centered public relations man who juggles a busy career with both a wife, Kelly (Radha Mitchell), and a mistress, Pamela (Katie Holmes). Stu steps into a phone booth on a busy New York street to make a call to Pamela without Kelly being the wiser, but as soon as Stu hangs up, the phone begins to ring. Curious, Stu picks it up -- and a stranger on the other end (voice of Kiefer Sutherland) informs him that if he hangs up the phone, he'll be shot. The red dot of an infrared rifle scope convinces Stu that the caller means business, and when another man tries to make his way into the booth, he's shot mere inches from Stu, calling the attention of the police. Captain Ramey (Forest Whitaker) naturally assumes that Stu was the killer, as Stu struggles to find a way to convince the police of what's happening before more lives are lost, without leaving the booth and putting his own life on the line. At one time proposed as a vehicle for Jim Carrey, Phone Booth was directed by Joel Schumacher, from a screenplay by exploitation icon Larry Cohen. ~ Mark Deming, Rovi

Kiefer Sutherland
as The Caller

Dean Cochran
as Reporter No. 1

Amy Kowallis
as Reporter No. 2

Tory Kittles
as Reporter No. 3

Bruce Roberts
as Reporter No. 4

Dean Tarrolly
as Newscaster No. 1