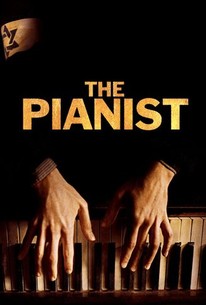 Well-acted and dramatically moving, The Pianist is Polanski's best work in years.

In this adaptation of the autobiography "The Pianist: The Extraordinary True Story of One Man's Survival in Warsaw, 1939-1945," Wladyslaw Szpilman (Adrien Brody), a Polish Jewish radio station pianist, sees Warsaw change gradually as World War II begins. Szpilman is forced into the Warsaw Ghetto, but is later separated from his family during Operation Reinhard. From this time until the concentration camp prisoners are released, Szpilman hides in various locations among the ruins of Warsaw.

Maureen Lipman
as The mother

Frank Finlay
as The father

Wanja Mues
as SS Officer who Slaps the Father

Nomi Sharron
as Woman with the Feather

Darian Wawer
as Child at the Wall

Zbigniew Zamachowski
as Client with Change

Lejb Fogelman
as Client with Change

Zofia Czerwinska
as Woman with Soup

Emilio Fernandez
as the Soup Snatcher

Maja Ostaszewska
as Woman with Child

Wojciech Smolarz
as Boy with Sweets

Katarzyna Figura
as the Neighbor

Cezary Kosinski
as Lednicki
View All

News & Interviews for The Pianist

Damian Chapa Preps Polanski Biopic
How Does "The Departed" Rank Among Oscar’s Best?
Adrien Brody in the Running for "Hulk" Sequel?
View All

Critic Reviews for The Pianist

Audience Reviews for The Pianist