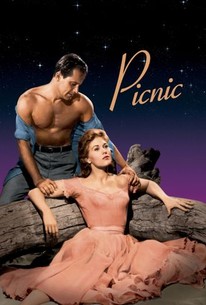 One of the biggest box-office attractions of the 1950s, Picnic was adapted by Daniel Taradash from the Pulitzer Prize-winning William Inge play. William Holden plays Hal Carter, a handsome drifter who ambles into a small Kansas town during the Labor Day celebration to look up old college chum Alan (Cliff Robertson, in his film debut). Hoping to hit up Alan for a job--or a handout--Hal ends up stealing his buddy's fiancee Madge Owens (Kim Novak). Hal also has a catnip effect on spinster schoolteacher Rosemary Sydney (Rosalind Russell), so much so that Rosemary makes a fool of herself in front of the whole town, nearly driving away her longtime beau Howard Bevans (Arthur O'Connell). Persuaded by his friends and family that Hal is no damn good, Madge is prepared to break off her relationship. As anyone who remembers the film's famous overhead closing shot knows, however, Madge is ultimately ruled by her heart and not her head. For a film set in Kansas, there's an awful lot of New York talent in the supporting cast (Susan Strasberg and Phyllis Newman come immediately to mind); still, the Midwestern ambience comes through loud and clear, especially during the perceptively detailed Labor Day picnic sequence. Broadening the film's appeal is its George Duning-Steve Allen title song, a variation of the old standard "Moonglow". Two sidebars: The original Broadway production of Picnic starred Ralph Meeker and Paul Newman; for the film version of Picnic, William Holden was obliged to shave his chest, lest his hairy torso cause the female moviegoers to conjure up impure thoughts.

Harold A. Beyer
as Chamber of Commerce Man