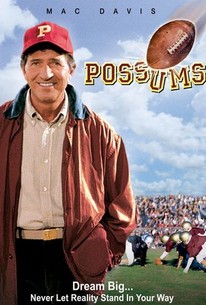 J. Max Burnett made his directorial debut with this family drama about a small-town sports announcer and a high school football team, the Possums. In the dying town of Nowata, Oklahoma, the giant retail Maxi Mart threatens to destroy the local hardware store run by Will Clark (Mac Davis), a lifelong Possums supporter. Life in Nowata is such that mayor Charlie Lawton (Andrew Prine) is on the brink of cancelling the school sports program. To save the Possums, Will goes on the air at the local radio station, fabricating fantastic Possum plays that never happened. In these imaginary games, the phenomenal fantasy team goes on a winning streak and is headed toward the finals. Ignoring the reactions of his wife Elizabeth (Cynthia Sikes) and others, Will soon has the support of the locals. As the Possums peak, the legit champions in neighboring Pratville are not pleased -- and the final showdown happens in a gridiron confrontation. Shown to an enthusiastic audience at the 1998 Seattle Film Festival.

Mac Davis
as Will

Cory Lloyd
as Young Will

Bobby Barry
as Reporter No. 1

K.R. Murnan
as Phil
View All

There are no critic reviews yet for Possums. Keep checking Rotten Tomatoes for updates!

There are no featured audience reviews for Possums at this time.