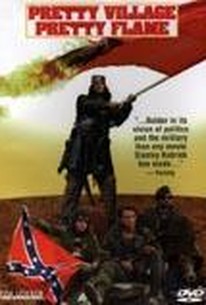 Though cloaked in explosive black humor, the serious anti-war message of this bitterly satirical and politically charged Yugoslav film cuts like shrapnel. Set in Bosnia during 1980 and 1992 (like a pendulum, the time frame swings back and forth), and allegedly based upon a true story, the plot focuses upon the longtime friendship of Muslim Halil, and Serbian Milan. While growing up during the '80s, the two often hung out near an abandoned tunnel. Though curious, the boys were too frightened by the mythical boy-eating ogres said to venture within. The story moves to 1992 and begins as the war between the Serbs and the Muslim ignites in horrible violence and the friends find themselves forced into becoming enemies. Meanwhile, a beautiful American journalist is captured by the Serbs. The film opens with a shot of European and American dignitaries smiling broadly as they inaugurate the new Brotherhood and Unity tunnel that links Zagreb and Belgrade. Later in the film, it will become the scene of horror when Serbian soldiers are trapped by Muslims within. With nothing to do but wait for death, the trapped soldiers amuse themselves by staging allegorical circus acts. ~ Sandra Brennan, Rovi

There are no featured audience reviews for Pretty Village, Pretty Flame at this time.