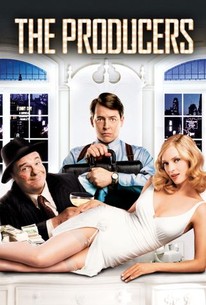 Despite the rich source material, The Producers has a stale, stagy feel more suited to the theater than the big screen.

After transforming his first motion picture into a smash Broadway musical, Mel Brooks brings the story of two would-be theatrical moguls turned con men back to the screen in this musical comedy. Max Bialystock (Nathan Lane) was once one of Broadway's most successful producers, but a string of flops has thrown his career into a tailspin, and now he struggles to raise the cash to stage new shows by playing gigolo to lonely old ladies. While going over his books, accountant Leo Bloom (Matthew Broderick) notices that Bialystock raised more money than he spent for one show, and points out that if one raised enough money for a show that closed in one night, you could make more off a flop than a hit. This strikes Bialystock as a brilliant scheme, and he decides to give it a try, persuading Bloom to join him in staging the world's greatest flop. After discovering a truly vile script -- "Springtime for Hitler," a musical set in the Third Reich written by neo-Nazi pigeon fancier Franz Liebkind (Will Ferrell) -- and giving a key role to the secretary Ulla (Uma Thurman), a drop-dead gorgeous blonde with only a tenuous understanding of the English language, Bialystock and Bloom are certain they have the disaster they need for their plan to work. But the scheme unexpectedly goes wrong when "Springtime for Hitler" becomes a "so bad it's good" hit. Mel Brooks co-wrote the screenplay for The Producers as well as producing it, but directorial chores were handed over to Susan Stroman, who also directed the Broadway show; Nathan Lane and Matthew Broderick also repeated their roles from the Broadway production. ~ Mark Deming, Rovi

Will Ferrell
as Franz Liebkind

Jai Rodriguez
as Sabu the Houseboy

Debra Monk
as Lick Me-Bite Me

Eileen Essell
as Hold Me-Touch Me

Andrea Martin
as Kiss Me-Feel Me

News & Interviews for The Producers

Critic Reviews for The Producers

Audience Reviews for The Producers