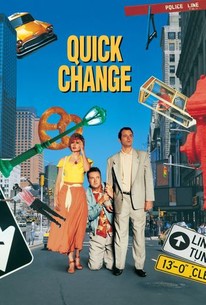 Quick Change makes the most of its clever premise with a smartly skewed heist comedy that leaves plenty of room for its talented cast to shine.

Bill Murray co-directed (along with Howard Franklin) this mixture of The Out-of-Towners and After Hours, concerning Grimm (Bill Murray), a frustrated city planner who is fed up with the corruption and venality of New York City. Getting together a couple of accomplices -- Phyllis (Geena Davis), who admires Grimm for his audacity, and Loomis (Randy Quaid), a follower to Grimm's leader since grade school -- Grimm decides to rob a bank, pocket the money, get out of town and take off to tropical splendor. Dressing in a clown suit, Grimm devises a unique way to rob a bank -- taking a group of hostages at the bank and inviting the police to surround the bank. Amazingly, although pursued by a police chief (Jason Robards), the trio manage to pull off the robbery. However, the problems really start when they try to get from the bank to the airport -- which proves to be more difficult than the robbery.

Ryan Mitchell
as Kids at Grocery

Elizabeth A. Griffin
as Hostage

Frank Maldonado
as Kid at Grocery

Ryan Mitchel
as Kid at Grocery

Michael Chapman
as Policeman at Grocery