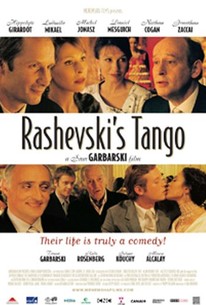 Director Sam Garbarski marked his feature film directorial debut in 2003 with the family-comedy drama Le Tango des Rashevski (The Rashevski Tango), a tale of one extended family's struggle to find meaning and identity within their own somewhat dormant Jewish heritage. When 81-year-old family matriarch Rosa Rashevski passes away, her descendants are left unprepared, as they have no idea what traditional Jewish rites they should be practicing. As a result, various Rashevski begin some rather intense periods of spiritual introspection, ranging from Rosa's granddaughter Nina's (Tania Gabarski, daughter of the director) proclamation to start and raise a Jewish family to grandson -- and former Israeli military man -- Rica's (Rudi Rosenberg) turbulent relationship with his Muslim girlfriend, Khadija (Selma Kouchy). To further complicate matters, a non-Jewish family friend named Antoine (Hippolyte Girardot) shows up at the funeral and strikes up a conversation with Nina, whom he used to baby-sit when they were both younger. As he grows more fond of the young woman and becomes intent on making her his wife, he learns of her intentions to have a Jewish family and tries to find a solution that would make the young woman reconsider him as a suitor.

There are no featured audience reviews for Rashevski's Tango at this time.