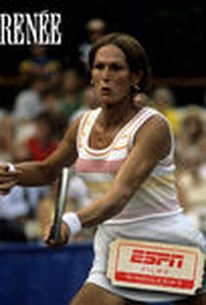 In 1976, Renee Richards began competing in amateur tennis tournaments in California, and immediately made a name for herself -- a six foot, two inch tall woman in her early forties who played left handed and with unusual skill, strength and stamina was not going to go unnoticed for long. When people began asking questions about Renee, they made an unexpected discovery -- only a year earlier, Renee had undergone sexual reassignment surgery, after spending her life as Richard Raskind, an amateur tennis champ, surgeon, husband and father. When Renee filed suit to be allowed to play in the U.S. Open Tennis Tournament as a woman, she struck a blow for the rights of transsexuals, but she also put herself and her family into the public eye, with unexpected consequences. Filmmaker Eric Drath explores the life of Renee Richards both on and off the tennis court in the documentary Renee, in which her friends and family discuss the impact of sudden fame on her life, a number of noted players (including Martina Navratilova and Billie Jean King) talk about her skills as an athlete, and Renee herself talks about her journey and her difficult relationship with her son. Renee was produced for the ESPN cable television network, and was an official selection at the 2011 Tribeca Film Festival.

There are no featured audience reviews for Renée at this time.