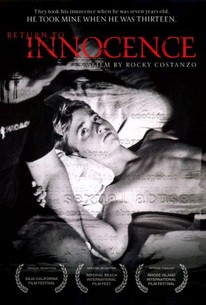 Emerging filmmaker Rocky Costanzo makes his feature directorial debut with this edgy courtroom drama concerning a prolific child psychologist accused of abusing a minor. Adapted by author Gary M. Frazier from his own novel, Return to Innocence tells the tale of Glen Erskine. A devoted family man with a reputation as the foremost expert in the arena of male adolescent sexuality, Erskine is an established child psychologist and the current chief of staff at New Horizons - a counseling center and group home for abused boys. Tommy Jackson is the latest arrival at New Horizons. Ever since Tommy was a young boy, he has suffered psychical, emotional, and sexual abuse at the hands of his deeply disturbed mother. When the FBI arrests Tommy's mother for producing pornographic videos of her son and distributing them on the internet, the emotionally damaged boy is taken into custody by the Department of Social Services, and sent to New Horizons for treatment. At first, it seems as if Tommy is well on the road to emotional recovery. Just as it begins to seem that the boy is summoning the strength to move beyond his dark past, however, a shocking revelation about his relationship with a New Horizons staff member sets the stage for tragedy. Believing Erskine is the man responsible for revealing his deeply personal secret, Tommy impulsively lashes out by accusing him of a crime that could easily destroy the prominent child psychologist reputation and career. When a child's word is taken as the absolute truth, what hope is there for an innocent man who has devoted his entire life to the benevolent cause of helping troubled children?

Critic Reviews for Return to Innocence

There are no critic reviews yet for Return to Innocence. Keep checking Rotten Tomatoes for updates!

Audience Reviews for Return to Innocence

There are no featured audience reviews for Return to Innocence at this time.