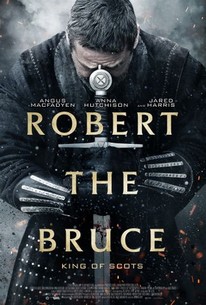 It's inspired by epic real-life events, but rich cinematography and the best of intentions aren't enough to carry Robert the Bruce past its leaden pace and bland storytelling.

Robert the Bruce is a hard-hitting historical epic covering the turbulent time after William Wallace's victories depicted in Braveheart. Scotland 1306, Robert the Bruce (Angus Macfadyen: Braveheart) crowns himself King and takes the ambition of Scotland's freedom as his own. But he cannot overcome England's power: defeated again and again, his army is scattered and Scotland's nobility abandons him. Hunted, with a price on his head, he finds himself alone and wounded. The cause of freedom seems lost once more. Hidden secretly in a secluded croft of a clan pledged to England, and close to death Robert is nursed back to life by a young widow and her orphaned children. His determination to do what is right, regardless of the cost, reinvigorates his passion to rise again. But it's not revenge he desires. It's freedom. Now. Also starring Daniel Portman (Game of Thrones) Anna Hutchinson (Cabin in the Woods), Jared Harris (The Crown), Zach McGowan (Black Sails, Agents of S.H.I.E.L.D.), Patrick Fugit (Almost Famous), Kevin McNally (Pirates of the Caribbean) and Emma Kenney (Shameless) and featuring original music from Scottish national treasure, Lulu. Robert the Bruce picks up where Braveheart left off in a thrilling, brutal and breath- taking fashion.

Angus Macfadyen
as Robert the Bruce

Gabriel Bateman
as Scot
View All

Critic Reviews for Robert the Bruce

Audience Reviews for Robert the Bruce

There are no featured audience reviews for Robert the Bruce at this time.