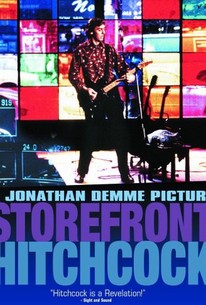 This concert documentary, Jonathan Demme's third performance record after Stop Making Sense (Talking Heads) and Swimming to Cambodia (Spalding Grey), moves through New York City skyscrapers to street level where it focuses on British singer-songwriter Robyn Hitchcock, who first received U.S. notice in the late '70s when he was part of the Soft Boys group. As a solo act, he was heard on U.S. radio during the late '80s. After Rhino reissues, he now records for Warners, but his surreal songs and pleasant patter are best presented in live performance away from studio confines. In this case, Hitchcock delivers 15 tunes in a Manhattan store window (to his unseen live audience). Passers-by peered in while Demme filmed with four cameras during a two-day period, shooting Hitchcock against a window display backdrop of a gray curtain, translucent colored squares, candles, a large tomato sculpture, and a mirrored ball. Garbed in an array of loud shirts, Hitchcock plays both acoustic and electric guitar, joined by guitarist-vocalist Tim Keegan on one number and violinist Deni Bonet on two. Hitchcock opens with "Devil's Radio" and chats up a variety of topics (minotaurs carrying duct tape, religion, politics, and beef-eating), between other songs -- "Airscape," "1974," "Glass Hotel," "You and Oblivion." Shown at the 1998 San Francisco Film Festival.

There are no featured audience reviews for Robyn Hitchcock - Storefront Hitchcock at this time.