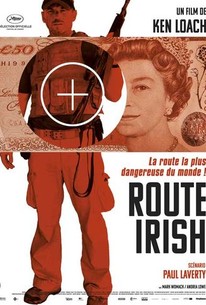 Celebrated British filmmaker Ken Loach explore the controversies of his nation's role in the war in Iraq in this intelligent thriller. Fergus (Mark Womack) served with distinction in a British Special Forces outfit in Iraq, and after his hitch in the Army ended, Fergus was approached by a private security firm working with civilian contractors in the war zone. Fergus wasn't interested in returning to Iraq, but when he was offered 10,000 a month for his services, he changed his mind, and persuaded his army buddy Frankie (John Bishop) to also sign on. Fergus came to regret his decision when Frankie died after hitting an improvised explosive device while traveling on Route Irish, the treacherous road between Baghdad's airport and the heavily fortified Green Zone. While attending Frankie's funeral, Fergus is approached by a woman who gives him Frankie's old cell phone, which holds a startling video of Iraqi civilians being murdered by employees of the same security firm that employed him and Frankie. Fergus believes there's a connection between the video and Frankie's death, and sets out to find it with the help of Frankie's widow Rachel (Andrea Lowe) and Harim (Talib Rasool), an Iraqi refugee. But the top men at the firm are not about to admit any wrongdoing, and uncovering what really happens proves to be a difficult and taxing process. Route Irish received its world premiere at the 2010 Cannes Film Festival.