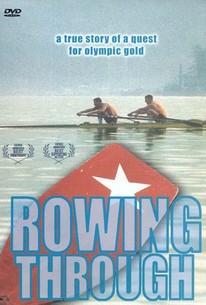 On the heels of making Painted Desert, Japanese director Masato Harada took another stab at presenting America to a mass Japanese audience -- this time with a largely Western cast. Based on David Halberstam's book The Amateurs -- about Olympic class rowers robbed of their dreams of gold in the 1980 Moscow games by when America protested Russia's ill-fated invasion of Afghanistan. The film focuses on Tiff Wood (Colin Ferguson), a Harvard skuller who still broods over the decree as he trains for the 1984 games. Slouching past his prime and feeling it, Tiff casts a leery eye at his younger, stronger competitors, particularly the square-jawed Bigelow (Pete Murnik) and a shorn hunk of sculpted muscle who calls himself Polar Bear Nelson (James Hyndman). When not pounding the waves, the divides his attention between Kate (Leslie Hope), a mean-spirited former Harvard coxswain who inflates Tiff's hopes at making the team, and Slim (Helen Shaver), a world-weary Russian barkeep who tells Tiff to dry his oars. This being a Japanese production -- a national cinema not known for its Rocky-style endings -- this underdog gives his all to the film's final tournament, and fails.

Richard Jutras
as Adam
View All

Critic Reviews for Rowing Through

There are no critic reviews yet for Rowing Through. Keep checking Rotten Tomatoes for updates!

Audience Reviews for Rowing Through

There are no featured audience reviews for Rowing Through at this time.