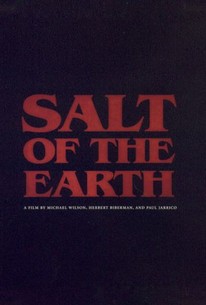 Salt of the Earth

Salt of the Earth Photos

Though it cannot help but lapse into dogma and didactics at times, Salt of the Earth is a powerful, persuasive labor-management drama. With the exception of five actors (including future Waltons star Will Geer), the cast is comprised of non-professionals, mostly participants of the real-life strike action upon which the film is based. Set in a New Mexico mining town, the film concerns the measures taken by the largely Hispanic union to improve working and especially living conditions for the poverty-stricken workers. Remarkably prescient, given that the film was made long before the women's movement, is the fact that it is the wives who keep the strike alive while their husbands are beaten and otherwise oppressed by the owners. Not that the miners wholeheartedly accept this; one of the script's many on-target observations shows the macho workers resenting their wives' intervention. The ultimate victory over the strikebreakers (led by Geer at his most odious) comes about as much from male-female solidarity as the workers' pre-set determination. Co-produced by the International Union of Mine, Mill and Smelt Workers, Salt of the Earth was assembled under conditions of extreme duress by a group of Hollywood expatriates, all victims of the Blacklist: producer Paul Jarrico, director Herbert Biberman, screenwriter Michael Wilson and star Will Geer. "Freed" of the strictures of Hollywood pussyfooting and censorship, the film's auteurs are able to explore several subjects previously considered taboo. As a result, Salt of the Earth seems even fresher and more pertinent now than it did when given its extremely limited first release in 1954.

Will Geer
as Sheriff

Albert Munoz
as Miner
View All

News & Interviews for Salt of the Earth

Critic Reviews for Salt of the Earth

Audience Reviews for Salt of the Earth

Salt of the Earth Quotes