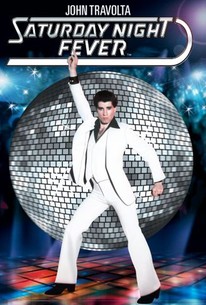 Boasting a smart, poignant story, a classic soundtrack, and a starmaking performance from John Travolta, Saturday Night Fever ranks among the finest dramas of the 1970s.

John Travolta graduated from minor celebrity to superstar with Saturday Night Fever. Travolta plays Tony Manero, a Brooklyn paint-store clerk who'd give anything to break out of his dead-end existence. In life, Tony is a peasant; on the disco dance floor, he's a king. As the soundtrack plays one Bee Gees hit after another (including "Stayin' Alive"), we watch white-suited Tony strut his stuff amidst flashing lights and sweaty, undulating bodies. Tony's class aspirations are mirrored in his relationship with his dance partner, Stephanie (Karen Lynn Gorney), a secretary eager to move into the glamorous world of Manhattan. Saturday Night Fever's huge success grew meteorically thanks to the towering popularity of its soundtrack; during the first half of 1978, when the movie's disco songs saturated the singles charts up to four at a time, it was no longer clear whether the hit movie was feeding the hit songs or the hit songs were feeding the hit movie. This crossover between music and movies set the pace for many movies to come, as it also marked the rise and fall of 1970s disco culture. Two versions of this film exist: the original R-rated version and a PG version, edited down to more "family-friendly" fare and fed to the public with the tagline, "Because we want everyone to see John Travolta's performance." ~ Hal Erickson, Rovi

Shelly Batt
as Girl in Disco

Ellen March
as Bartender
View All