The Secret Life of Words 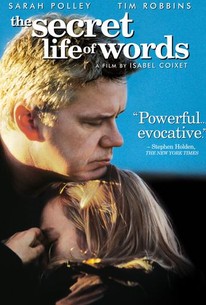 The Secret Life of Words

The Secret Life of Words is a slow, mannered drama, but with a revelatory and powerful ending that rewards the patient viewer.

The Secret Life of Words Photos

Writer-director Isabel Coixet's (My Life Without Me) beautifully wrought chamber drama The Secret Life of Words opens on Hanna (Sarah Polley), a laconic, backward and introverted girl in her early '30s, quietly drowning in her own isolation. Partially deaf from working an untold number of hours in a loud factory, Hanna must wear a hearing aid. When her supervisors -- deeply concerned about the four years that have lapsed in Hanna's life without a break -- force her to go on holiday for a month, she hesitantly takes off for a coastal village in the north of Ireland. Once there, she decides to dine in a local restaurant, and overhears, by chance, a telephone conversation conducted by Victor (Eddie Marsan), regarding an accident on a nearby oil rig that he precipitated, which left a victim, Josef (Tim Robbins) in its wake. Hanna tells Victor that she is a nurse, and is instantly flown to the rig to treat the bedbound Josef -- temporarily blind from extensive cornea damage, and his body blanketed with severe burns. She also encounters the structure's motley and eccentric band of workers -- from ecologist Martin (Daniel Mays), who spends his time studying mutated mussels that collect on the ship's base and the waves that strike the side of the rig, to Josef, to chef Simon (Javier Camára), who prepares "gourmet" food no one else can stand, to Dimitri (Sverre Anker Ousdal), an elderly gentleman who is as much of a loner as Hanna. As Hanna begins to foresee a new place for herself among these individuals, a relationship gradually develops between Hanna and Josef, who holds his new friend rapt with lyrical, evocative, magisterial tales from his past -- unknowingly drawing Hanna, one step at a time, toward inner joy, self-expression, and revelation of her own sad and complex story. ~ Nathan Southern, Rovi

Reg Wilson
as Manager
View All

News & Interviews for The Secret Life of Words

RTIndie: Suit-Seeking Bob Dylan Isn’t the Only One Against "Factory Girl"
Critical Consensus: "Charlotte’s Web" Is Good, Indeed; Smith Is Strong, "Pursuit" Less So; "Eragon" Gets Burned
View All

Critic Reviews for The Secret Life of Words

Audience Reviews for The Secret Life of Words

The Secret Life of Words Quotes