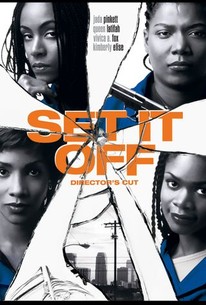 It may not boast an original plot, but Set It Off is a satisfying, socially conscious heist film thanks largely to fine performances from its leads.

Set It Off Ratings & Reviews Explanation

Set It Off Photos

The sophomore film effort from music video director F. Gary Gray, Set It Off is a crime thriller about four women bank robbers from a housing project in L.A. Ever since her parents' death, Stony (Jada Pinkett Smith) has had to act as a parent to her little brother Stevie (Chaz Lamar Shepard). She works in various capacities to make a future for him at U.C.L.A. Cleo (Queen Latifah) is a butch lesbian who wants nothing more than to customize her classic car. Tisean (Kimberly Elise) is a painfully shy single mother to her son Jajuan, struggling to make ends meet. Frankie (Vivica A. Fox) is the stylish bank teller who gets fired in the opening scene and ends up working with the other three at a janitorial service owned by irritating boss Luther (Thomas Jefferson Byrd). With Frankie upset from her unjust firing, Stony angry from the wrongful killing of her brother, and Tisean losing her baby to the child protective services, the four friends are motivated to rob a bank themselves. Looking for thrills, Cleo gets some guns from Black Sam (Dr. Dre in a cameo role), and they pull off their first job without a hitch. Their success starts a trend and they rob other banks in the area, all the while being investigated by Detective Strode (John C. McGinley). In a romantic subplot, Stony finds romance with wealthy Harvard-educated Keith (Blair Underwood) before the violent chase-scene ending. ~ Andrea LeVasseur, Rovi

Vivica A. Fox
as Frankie

Critic Reviews for Set It Off

Audience Reviews for Set It Off

Set It Off Quotes