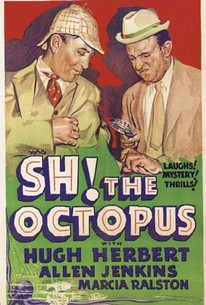 Sh! The Octopus is a low-budget remake of Ralph Spence's oft-filmed stage melodrama The Gorilla. The old-dark-house setting of the original has been changed to a lonely lighthouse, while Spence's marauding gorilla has metamorphosed into a giant special-effects octopus. Detectives Kelly (Hugh Herbert) and Dempsey (Allen Jenkins) are summoned to the lighthouse to prevent harm from befalling heiress Verta Vernoff (Marcia Ralston). The two gumshoes seem far too preoccupied to perform their duties (Kelly is awaiting the birth of his first son), and indeed they prove so inept that at one point the heroine screams "What's the matter with you?" A series of murders occur, all attributed to the king-sized octopus, but it turns out that one of Verta's oldest and most trusted friends is responsible. Without giving anything away, it must be said that the "surprise" ending of Sh! The Octopus is one of the stupidest ever captured on film, though at least it affords Hugh Herbert and Allen Jenkins the opportunity to dress up in baby clothes!

Eric Stanley
as A Stranger

Elspeth Dudgeon
as Nanny
View All

Critic Reviews for Sh! The Octopus

Audience Reviews for Sh! The Octopus

There are no featured audience reviews for Sh! The Octopus at this time.