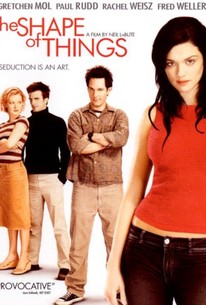 The Shape Of Things

LaBute returns to his earlier themes of cruelty in relationships, and the results hit hard.

The Shape Of Things Photos

After a detour into lighter and more compassionate fare with Nurse Betty and Possession, Neil LaBute returns to the themes of his earlier films with this dark and corrosive look at male-female relationships. Adam (Paul Rudd) is a chubby, bespectacled nebbish of a college student who makes money in his spare time as a security guard at the university's art museum. One evening at work, Adam spies another student preparing to deface a statue -- Evelyn (Rachel Weisz), a beautiful art major who is offended by a fig leaf that's been used to "censor" a statue of a nude male, and is prepared to replace the disguised member with spray paint. Adam can't quite bring himself to kick Evelyn out of the museum, and she responds by giving him her phone number. Adam and Evelyn begin dating, and as she challenges his ideas about art and morality, she begins remaking Adam into the sort of boyfriend she'd prefer. Under her influence, Adam loses weight, gets contact lenses, changes his hairstyle, starts dressing better, and assumes a cooler and more confident personality. Adam's pal Philip (Frederick Weller) notices the changes in his friend and isn't happy with the way Evelyn has been molding Adam to her specifications. Adam and Evelyn have dinner one night with Philip and his fiancée, Jenny (Gretchen Mol), and before long Philip and Evelyn are at each other's throats as Adam and Jenny cower along the sidelines. The tensions between Philip and Evelyn exacerbate uneasiness between Jenny and her husband to be, while at the same time, Jenny and Adam begin to recognize a mutual attraction that's long lurked beneath the surface. The Shape of Things was adapted by LaBute from his stage drama of the same name; a selection of songs by Elvis Costello comprise the soundtrack.

News & Interviews for The Shape Of Things

Critic Reviews for The Shape Of Things

Audience Reviews for The Shape Of Things

The Shape Of Things Quotes