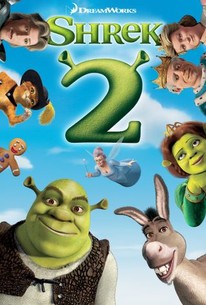 It may not be as fresh as the original, but topical humor and colorful secondary characters make Shrek 2 a winner in its own right.

After battling a fire-breathing dragon and the evil Lord Farquaad to win the hand of Princess Fiona, Shrek now faces his greatest challenge: the in-laws. Shrek and Princess Fiona return from their honeymoon to find an invitation to visit Fiona's parents, the King and Queen of the Kingdom of Far, Far Away. With Donkey along for the ride, the newlyweds set off. All of the citizens of Far, Far Away turn out to greet their returning Princess, and her parents happily anticipate the homecoming of their daughter and her new Prince. But no one could have prepared them for the sight of their new son-in-law, not to mention how much their little girl had changed. Little did Shrek and Fiona know that their marriage had foiled all of her father's plans for her future--and his own. Now the King must enlist the help of a powerful Fairy Godmother, the handsome Prince Charming and that famed ogre killer 'Puss In Boots' to put right his version of "happily ever after."

Erika Thomas
as Maiden No.2

Andrew Adamson
as Captain of the Guards

Antonio Banderas
as Puss In Boots