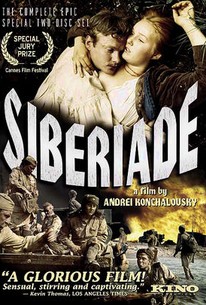 Sibiriada was controversial in the Soviet Union, but it received the Special Jury Prize at Cannes, the second most prestigious prize after the Palme d'Or. After making this film, director Mikhalkov-Konchalovsky moved to the West. In the story, the lives of two Siberian families lives are chronicled through three generations, beginning with the period just after the turn of the century, and carrying on through the '60s. Before the revolution, a poor boy is the same age as a girl from a rich family, who uses her family position to torment him. Meanwhile, his father has been building a "corduroy" wooden road into the forest. However, as the boy and girl grow up, they fall in love. Their union is forbidden by her family, and he is beaten by their henchmen and cast adrift at sea. During the Revolution, the girl flees her family, thinking to join her true love. Many years later, he returns to his village with his teenaged son, and discovers that the former rich girl was killed long ago. The teenaged boy, in turn, become a geological engineer, and returns to his father's village to look for oil. ~ Clarke Fountain, Rovi