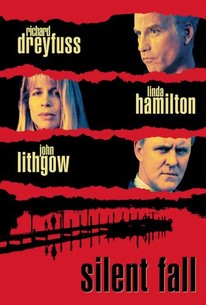 This by-the-numbers psychodrama about a child psychologist trying to discern the truth behind a pair of murders stars Richard Dreyfuss as Dr. Jake Rainer, a child psychologist living in an upscale community. Rainer retired when a patient committed suicide, but the local sheriff (J.T. Walsh) calls him to the scene of a double murder. In a lavish home, Rainer meets Tim Warden (Ben Faulkner) and his sister Sylvie (Liv Tyler, in her feature film debut), whose parents have been brutally slain. Sylvie hid in a closet and didn't see the killer, but Tim, who is autistic and cannot communicate, witnessed the crime. Rainer starts the complicated process of reaching Tim through gentle psychological techniques based on his theory that autistics think in sequences, while a colleague (John Lithgow) simply wants to drug the child into revealing the killer's identity. The real-life son of child psychologists who worked with autistic children, Silent Fall screenwriter Akiva Goldsman had better success with his first film, an adaptation of The Client (1994), a drama with a similar plot and themes.

There are no featured audience reviews for Silent Fall at this time.