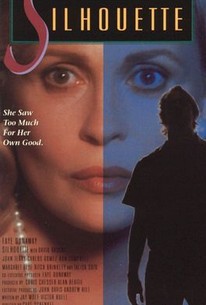 Silhouette, an excellent made-for-cable thriller, is the story of a businesswoman who is stranded by car trouble in a small town and who is the only witness to a murder. Samantha Kimball (Faye Dunaway), while waiting for her car to be repaired, stays in a rundown hotel in a small town. There, unable to sleep, she watches through her window as a car drives up to the home of a local waitress. She sees the shadow of a man get out and a violent attack and murder take place inside the home. After having made her statement to the police, Samantha becomes increasingly frightened as the killer begins to stalk her and her daughter, afraid that he can be identified. Dunaway is terrific as the woman who must fight to protect herself and her child, and she gives a cool, nuanced performance in a somewhat cliched role. The identify of the killer, not revealed until the bloody finale of the film, is not much of a surprise, but Silhouette, fast-paced and nicely directed by Carl Schenkel, makes the most of its familiar material and delivers an exciting, suspenseful lady-in-distress thriller.

Jonathan Hole
as Man in Hotel

Perla Walter
as Mother
View All

There are no critic reviews yet for Silhouette. Keep checking Rotten Tomatoes for updates!

There are no featured audience reviews for Silhouette at this time.