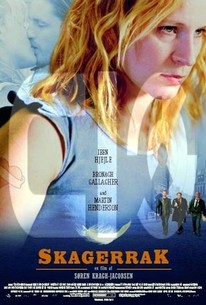 Two female drifters search for their next short-term jobs and for the reasons their lives have been filled with such wanderlust in Søren Kragh-Jacobsen's modern-day romantic fable Skagerrak. Best friends Marie (Iben Hjejle) and Sophie (Bronagh Gallagher) land on the Scottish mainland after a stint working on an oil rig, eager to move on to their next adventure. Just as Sophie decides to head to Glasgow to track down her mechanic boyfriend, the pair are set back after a one-night stand leaves Sophie severely beaten and robbed. While tending to Sophie at the hospital, Marie encounters a strange older man (James Cosmo) who later invites her to his estate while proclaiming to have an irresistible proposition for her. The old man, Sir Robert Lumley, offers to pay several thousands of pounds to Marie if she will agree to become a surrogate mother for his childless son and daughter-in-law. Initially disgusted, Marie reluctantly consents but struggles with the decision throughout her pregnancy. When a worse tragedy strikes the wanderers, Marie is forced to confront a number of issues in her life as she also finds both an unexpected love interest and an unexpected ally from the Scottish estate she has grown to hate. ~ Ryan Shriver, Rovi

There are no critic reviews yet for Skagerrak. Keep checking Rotten Tomatoes for updates!

There are no featured audience reviews for Skagerrak at this time.