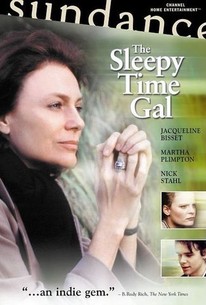 A thoughtfully assembled drama brought to life by sensitive performances, Sleepy Time Gal offers an intriguing glimpse of a woman at a crossroads.

Two women connected by family are drawn closer by fate in this low-key drama. Frances (Jacqueline Bisset) is a woman in her early fifties who had already begun to sense time was running out for her when she learned that she has cancer. While Frances is fighting the disease through medical treatment, she decides it's a good idea to do some travelling before it's too late, and she pays a visit to Bob (Seymour Cassel), a former boyfriend who now owns a farm in rural Pennsylvania. To Bob's surprise, Frances strikes up a fast friendship with his wife Betty (Peggy Gormley), and Frances shares a confession with her -- while Frances maintains a close relationship with her son Morgan (Nick Stahl), she also had a daughter by Bob that she put up for adoption, and she's not certain if she should track down the child while there's still time. Coincidentally, Frances' daughter is Rebecca (Martha Plimpton), a successful lawyer who has begun to express a curiosity about her birth parents. Rebecca has been hired by a large communications firm to deal with the paperwork regarding the purchase of a radio station in Florida, and while in the Sunshine State, Rebecca gets to know the station's manager, Jimmy (Frankie R. Faison). As Jimmy and Rebecca ease into a short-term romance, he shares stories about the "Sleepy Time Gal," a mysterious female disc jockey who worked at the station back in the '50s; what neither Jimmy nor Rebecca know is that the Sleepy Time Gal was actually Frances.

Randall Slavin
as Rich
View All